Off road motorbike tours in the spectacularly scenic mountains of Aragon, Catalonia and Valencia regions of north-eastern Spain on KTM enduro dirtbikes.

Ride one of our fully-prepared 4-stroke KTM EXC enduro trailbikes in one of the best areas of Spain for offroad motorbike touring. Endless trails in all directions, all types of terrain in all conditions of repair, and in parts of Spain normally inaccessible without an offroad motorcycle.

We run off-road tours for all riding levels, from novice offroaders to expert riders who come to hone their skills for their next competitive event. Whether it's a day, a long weekend or a full week's riding, we promise the best offroad riding there is, on the best enduro bikes, the best trails, and in the best area for offroad riding in Spain.

Contact us now to arrange a tour, or to book places on a pre-arranged tour. 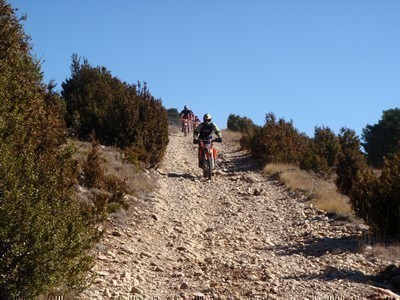 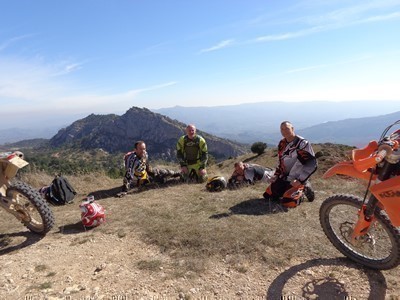 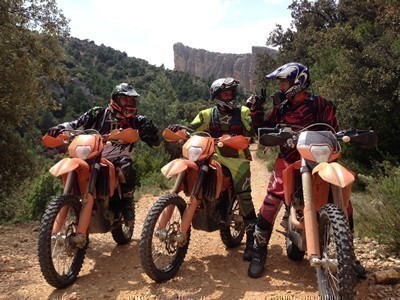 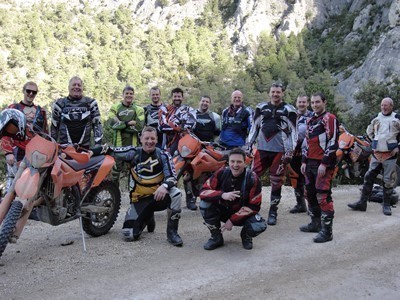 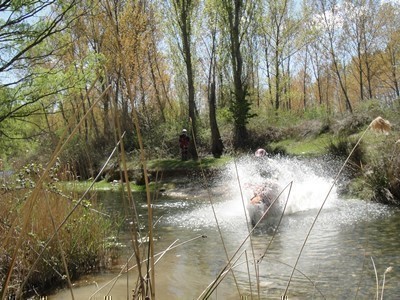 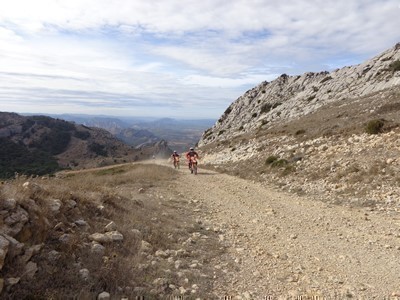 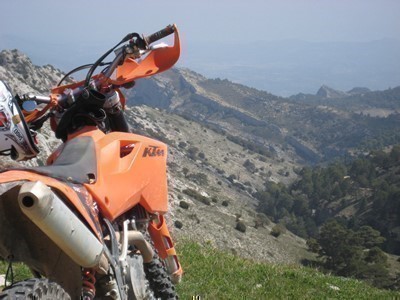 Based in one of Spain's most beautiful towns in traditional, rural Spain.

Ride the leading offroad motorcycle of the moment - KTM.

Free loan of riding gear if necessary - we have all sizes of scrupulously clean riding gear.

The most experienced offroad tour operator in Europe.

"It was a long distance to travel from California to ride dirt bikes but the trip was really worth the effort. I am really impressed with your professionalism and commitment to delivering a positive experience to your clients and can certainly appreciate why you have so much repeat business. The food was the best I have had in Spain and I particularly enjoyed the lunches in the small villages which added an unexpected bonus to the trip. Lastly, I am pretty sure my riding skills have/will improve after following your near perfectly carved track for 500km!"

Years guiding between the 3 TrailbikeTours guides

We're based near Valderrobres, a stunning example of a Spanish medieval county town, immaculately preserved and sympathetically restored over the centuries. The capital of the Matarraña district (known as "The Tuscany of Spain"), in the Teruel province of Aragon, Valderrobres is the perfect base for any offroad motorbike holiday or enduro tour in north-east Spain.

In contrast with the dry, barren, dusty landscapes seen further south in Spain, north-east Spain is a lush, mountainous region with spectacular scenery, some of the most beautiful mountain towns and villages in Spain, and possibly the best offroad riding anywhere in Spain. Teruel, the least inhabited province in Spain, with it's labyrinth of thousands of kilometres of dirt trails, is offroad heaven.

We ride in the most impressive Els Ports Natural Park, in the mountains of remote, rural Aragon, Valencia and Catalonia regions, and in the picture-postcard Matarraña, Terra Alta, Els Ports and Maestrazgo districts.

Spain's most beautiful, ancient and undiscovered natural scenery - as seen from a KTM!!

Since 2010 we've been based near the medieval country town of Valderrobres - an unrivalled location for offroad motorbike touring in the Matarraña and Maestrazgo districts of Teruel,  Aragon, the magnificent Els Ports Natural Park (Aragon, Catalonia and Valencia regions), and in the Terra Alta district of Catalonia.

Our routes are always a "work-in-progress", discovered and improved over the many years we've been riding in the area. We're blessed with the trails we already know, but when we find new trails, it just gets better. An offroad biker's paradise indeed.

If the idea of a motorbike holiday of a lifetime, riding the best bikes available, on incredible trails, in stunning scenery and in perfect riding weather interests you, then read on.